About us: 'our vision'

At Tiny Homes Perth we believe in maintaining the Great Australian Dream of home ownership. From residential to rural living, this dream is within everyone's reach with a Tiny Homes Perth home.

Simon Joiner was following his passion when he entered the modular building and construction industry. In starting Tiny Homes Perth, Simon has pursued this passion further, combining his knowledge of the home building industry with an added twist, to provide "small homes, BIG ideas".

Tiny Homes Perth is proud to promote a strong family culture; supporting one another by being equal to the task. It is this philosophy which allows us at Tiny Homes Perth to work seamlessly with our clients.

From hands on fabrication to administration and management, Simon Joiner (General Manager / Owner) knows how to support a team. He has the ability to multi-task, whether it's playing a supportive role or seeing a task through to completion.

Upon completion of his apprenticeship at the age of 21, Simon was offered the supportive role of Foreman. This entailed the preparation of work while appreciating that the older and more experienced members of the team completed the tasks.

Starting his own business at 23 (Simon's Metal Shop), Simon specialised in Wrought Iron Works, however it was not long before he realised that he wanted more from his career.

Simon accepted a role with TR Homes as an Estimator, and it was over the next 6 years that he worked his way up to Manager, becoming General Manager under the ABN Group banner in 2006. With over 50 employees, TR Homes provides modular housing throughout the state of Western Australia, and is the leader in its industry.

With a growing family, a work-home balance was soon desired, so Simon took on several other positions. He  was involved in a 55-home development in Newman followed by a supportive role in Malaysia before embarking on the supportive role of Operations Manager with the WBS Group. Over the next 2 years Simon held the position of General Manager at WBS Homes.

Throughout the 35 years of his career, Simon has fabricated, administered and managed multiple businesses and positions. It is with this experience, together with a passion for the modular building industry and a desire to maintain the Great Australian Dream, that Simon founded Tiny Homes Perth.

Susan Joiner plays a supportive role to her husband, Simon, performing administrative duties and running the accounts for Tiny Homes Perth. She draws on her experience of ten years supporting the payroll department of the ANZ bank in Perth, followed by 2 years based in Melbourne. 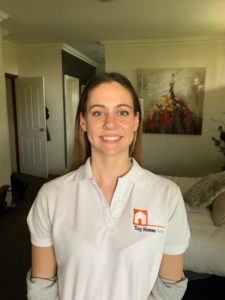 Amy has spent the last three years at Curtin University studying marketing and management. Using her knowledge, she has brought in a new way of marketing with Tiny Homes Perth. Together with Simon, they have created a new social platform for tiny living.

Tiny Homes Perth would like to express its sincere thanks to its family members, tradespeople and suppliers for their continuous support.

Things you may not know of the Tiny Home Industry!

Want an affordable, comfortable home? Give us your design ideas or simply look at the Tiny Homes Perth range to get started. Call us to discuss today!